I had a fascinating personal „social media moment“ today:

I took this photo from the 1st floor of Berlins well-known digital nomad café St. Oberholz. It shows the Rosenthaler Platz, a vivid crossing in the middle of Berlin. Naturally, this place is normally not painted, but plain grey as street asphalt happens to be.

Minutes before, bikers had poured paint from big boxes in front of cars that waited for green lights. So the cars and their wheels, if the driver wanted it or not, became the brush tool for this guerilla public art piece.

I could gather the info that the action had no commercial background but can rather be connected to the movement and idea of „reclaim the city“. Activists taped posters on the lights reading „abwaschbar, biologisch, abbaubar“ to ensure that the paint did no real long term harm to the junction. I still think that most of those car drivers will freak out back home seeing their wheels and Karosserie coloured over and over…

UPDATE II: Video from just/blogsport and more pics at urbanshit – thanks guys!

UPDATE III: Did I mention that there was a journalist from the Netherlands around?! Photo today in print edition of De Telegraaf

So I shot this pic with my mobile and posted it on Twitpic combined with a Tweet (short message on Twitter). It got me about 30 more than 50 ReTweets (= citations on Twitter) or mentions (@dkomm) so far, which for an A-Web-Opinion-Leader might not sound much, but is for me a personal record. This minute I’m posting, the photo got 760 950 1118 2986 3624 views online.

Think about the „art“ and the action what you want to, but I find it highly fascinating how this news spread so quickly and how a well regarded action on street made its way through the web. 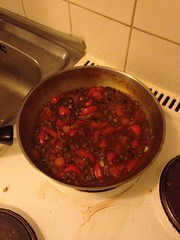 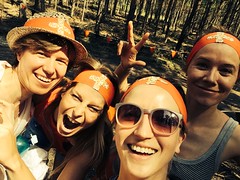 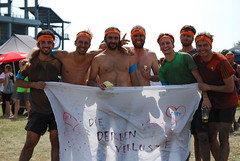